Las Hispaniola is one of several names that the island that is the home of the independent countries Haiti and La Republica Dominicana -- the Dominican Republic. But how dis it come to be so-called:

The island bears various names that are said to have been coined by its original inhabitants, the 'Amerindian' Taínos. When Columbus arrived and claimed sovereignty over the island in 1492 he named it La Isla Española, meaning "The Spanish Island", in Spanish.

Later Bartolomé de las Casas shortened the name to "Española", and when Pietro Martyr d'Anghiera detailed his account of the island in Latin, he translated the name as Hispaniola.

Because Anghiera's literary work was translated into English and French in a fairly short time, the name "Hispaniola" became the most frequently used term in English-speaking countries and was adopted for use in many references to the island in scientific and cartographic works.

Gonzalo Fernández de Oviedo and las Casas documented that the island was called Haití ("Mountainous Land") by the Taíno.

Pietro Martyr d'Anghiera recorded another name, Quizqueia (said to mean "Mother of all Lands") and thought to have been of Taino derivation. Bbut later research indicated that the word doesn't seem to derive from the original Arawak Taíno language.

Although the Taínos's use of the name Haití is verified and the name was used by all three historians referred to above, evidence suggests that it probably was not the Taíno name of the whole island.

Haití was the Taíno name of a region (now referred to as as Los Haitises) in what is in fact the northeastern section of the present-day Dominican Republic.

In the oldest documented map of the island, created by Andrés de Morales, that region is named Montes de Haití ("Haiti Mountains"). Las Casas apparently named the whole island Haití on the basis of that particular region; d'Anghiera said that the name of one part was given to the whole island.

The colonial terms Saint-Domingue and Santo Domingo are sometimes still applied to the whole island, although these names actually refer, respectively, to the colonies that became Haiti and the Dominican Republic. Domiicans themselves very commonly refer to their country as Sant Domingo, in common parlance. 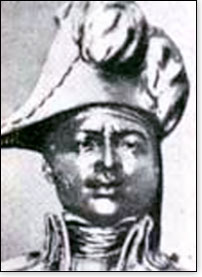 The name Haïti was adopted by Haitian revolutionary Jean-Jacques Dessalines as the official name of independent Saint-Domingue, as a tribute to the Amerindian predecessors.

The old name of Quisqueya (drived from Quizqueia) is still occasionally used to refer to the Dominican Republic.

Return to top of Hispaniola page