The Dominican Republic economy grew rapidly throughout the 1990's. Sadly it has taken a few blows in more recent years.

The Dominican economy ‘weathered the storm’, so to speak, of the devastating effects of Hurricane Georges in 1998. More profound effects have arisen since the turn of the millennium, due in part to the slow down in world economic activity, particularly in the U.S.

New hope for an invigorated economy

This has meant that growth has stalled in the last couple of years. Thankfully (we Dominicans hope) there has been a positive change at the 'top'.

The new Government that came to power in August 2004, headed by 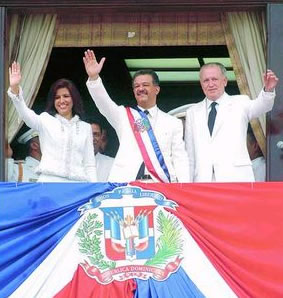 President Leonel Fernandez, had a lot to do

For many years the economy benefited primarily from the country being a significant exporter of sugar, coffee, and tobacco. In the last decade the service sector has overtaken agriculture as the economy's largest employer.

The increase in wealthy businessmen and other well-to-do ‘settlers’ has further emphasised the fact that the Dominican Republic economy exhibits substantial income inequality amongst its inhabitants. The richest 10% of the population enjoy almost 40% of GNP. Conversely the poorest 50% of the population receives less than 20% of national income.

But US affects us too...

Since 2000 low growth in the US economy, the source of nearly nine tenths of the country's export revenues, had adversely impacted on the Dominican Republic economy.

Below we provide a summary of key Dominican Republic economic statistics, but if you really need to obtain more in depth economic and historical information then the online bookstore, Amazon, have some useful texts you might like to consider purchasing.

We have tried to summarise the key data relating to the economy of our country below. We provide the main facts and figures relating to the following aspects of this important subject:


Please click here the summary of social and economic information on the Dominican Republic.

In 2012 President Danilo Medina was sworn in and proving popular with the electorate he was returned to the Presidency for a further term in the elections of 2016 after achieving an historic victory!

Wikipedia tells us that:
"Danilo Medina Sánchez (born 10 November 1951) is a Dominican politician and President of the Dominican Republic, since 2012.

Medina previously served as Chief of Staff to the President of the Dominican Republic from 1996 to 1999 and from 2004 to 2006, and is a member of the Dominican Liberation Party (PLD). He won the May 2012 Dominican presidential election, defeating Hipolito Mejía with 51% of the votes. In May 15th 2016 Danilo Medina leading a coalition of parties won the 2016 Dominican presidential election, defeating the leader of the opposition and PRM candidate Luis Abinader with 61.8% of the votes, the highest percentage received by a president elected in free elections since 1924 when Horacio Vásquez won the presidency with 69.8% of the ballots—surpassing Juan Bosch's record of 59.5% obtained in 1962, and Leonel Fernández's 57.1% of the votes obtained in 2004."

Things have not been completely trouble free, however, for although President Medina promised to fight long-standing corruption in the Dominican system he has received criticism from some political commentators that his efforts have not been successful enough, leading to a crisis of confidence in recent times.

Return to the top of the Dominican Republic economy page

We act as affiliates for Yoga Burn and appreciate you taking time to check out their great offer. Payments earned from Affiliations help to maintain this website. So thanks:

Copyright: All content on this site © Copyright (2005 - 2020) Al G Smith and Visiting-the-Dominican-Republic.com. No part of this website may be reproduced in any form without prior written permission from the copyright holders. Terms of Use: We try and research our content using reliable sources, and it is provided in good faith, but we can make no guarantee of its currency nor accuracy, nor can we accept liability for any use made of the information featured on this website. If you have any questions, comments or suggestions for improving the site, please feel free to contact us Privacy Policy: We do have forms that may require some personal information such as email to be submitted in order to enable us, or our recommended service provider, to contact and assist you. We do not rent, sell or otherwise compromise the privacy of your contact information. Submission of one of our web forms is an acknowledgement that you have read and accept this policy. Disclosure: For the sake of transparency and in light of recent legislative requirements, it is possible that from time-to-time we may include reviews or promotional articles about products or services from which we might potentially derive a benefit (perhaps in the form of an affiliate fee, or other reward IF a purchase is made). If this is the case, and should you make a purchase after using a link on this site to an outside vendor, we thank you for supporting and enabling the continued maintenance and development of this site by making any such purchase. Please Note: Any fee received is paid by the seller and does not impact adversely on the price paid by the you, as a buyer (that is: the item will cost you the same via any other similar link on any other website, including the vendors own website). You will also notice advertisements on some pages provided through the Google advertising network, or similar organizations, it costs you nothing to visit these links, although we might receive a very small fee for any visit to a website made through these links. But note that they will lead to external websites over which we have no control, and for which we can accept no responsibility. Always do your own due diligence before committing to any purchase. Contact information: If you do need or wish to contact us then you can use our on-site contact form, or you can currently write to us at: Al G Smith -- Website Manager Quinta de Cima Vale De Prazeres 6230-788 Fundao Castelo Branco PORTUGAL