A Brief History of the
Dominican Republic

Here we present a 'very brief' modern history of the Dominican Republic summarising the main political and presidential changes since the early 1900's.

So many presidential changes occurred in the first fifty or so years after Dominican independence, we decide to create another page about the

'History of the Dominican Republic' from independence to the end of the 1800's.

Okay - it's not a 'laugh-a-minute', but who said a website had to be 'all fun'...Who knows it might help someone with their school homework!!

It gets a bit confusing in places and we've taken liberties to summarise what happened (1962, for instance, what a lively year that was!).

If anyone feels we've left something important out...PLEASE do use the contact form on the navigation bar (left) and let us know...we never claimed to be historical experts!

Still, it might be of interest to some of you?

p.s. Be sure to check out our 'early history' of the Island of Hispaniola and the Dominican Republic, if you haven't already.

We hope you're not bored already, but just in case you have an overwhelming need to search for something else (and have already checked-out the rest of our site, of course?!):

to 1860: Inefficient and corrupt government by dictatorial leaders left the Dominican Republic in financial chaos

1861: The Dominican Republic was annexed by Spain.

1865: 'The War of Restoration' re-established the Dominican Republic's independence. For the next 14 years the Domincan Republic saw the coming and going of well over 20 (!!) Presidents! Find out more details about this period on our Dominican history in the 1880's page.

1900 to 1915: A time of 'relative' stability - but a period during which the government still failed to resolve financial 'problems'.

1916: In order to resolve the financial crisis, and reclaim debts it was owed, the US began a period of occupation that lasted 8 years.

1924: The U.S. withdrew and free elections bought Horacio Vasquez to power. Initially Vasquez's Presidency seemed a 'Golden'Period' in Dominican history. The country made great advances and huge investments were made in building and development.

1930: Vasquez, having lost the faith of the electorate, was overthrown by Rafael Leonidas Trujillo Molina, and hence the infamous 'Trujillo Era' began.

1937: Trujillo embarked on 'Hitleresque' genocide of Haitians living in and near the border to the Domincan Republic. The killing of 10 - 20,000 men, women and children horrified the rest of the world and undermined (the hitherto positive) Republic relations with the US. Nonetheless Trujillo retained his position and continued to rule with a rod of iron.

1947: The trappings of the Presidency were bestowed upon Rafael Trujillo's brother Hector Bienvenido Trujillo Molina. But, effectively, he was just a 'puppet' President as Rafael Trujillo remained to real 'Power nehind the throne'.

to 1960:A harsh and often cruel leader Rafael Trujilo used 'secret police' to keep the people under strict control. Though a period of dread for many ordinary Dominicans, financially the Dominican Republic was well managed. Trujillo undertook many public building and works projects, and achieved considerable improvements in education standards. Also, for the first time in over a century foreign debt was repaid.

1961: On May 30th Rafael Trujillo was assassinated, with the alleged assistance of the CIA,finally ending the 'Era'.

Thus began another period of political turbulence. Trujillo's vice-president, Dr. Joaquin Balaguer embarked on his first brief tenure as President. Lack of popular support and squabbling between the Trujillo family, members of which had returned from exile to try and seize power, amongst other occurrences including a short-lived military coup, resulted in a year of turmoil.

1962: At the end of this year the first free election for nearly four decades were held

1963: In February, after spending over 32 years in exile, the founding father of the Partido Revolucionario Dominicano (PRD), Dr. Juan Bosch Gavino came to power.

1963:In September a military coup displaced Bosch and made Emilio de los Santos President of the Dominican Republic.

to 1965: Bosch and his supporters, foremost amongst which was General Elias Wessin y Wessin, continued to cause substantial civil disturbances. De los Santos was hence displaced by a US military occupation that remained on Dominican soil, to the considerable resentment of many Dominicans, until the last quarter of the year.

1970: Balaguer was elected for a further term as President.

1974: Dominican's once more re-elected Balaguer, but then once again his only serious opponent had withdrawn as the election drew near.

1978: In the first openly contested election for many years Silvestre Antonio Guzman Fernandez of the PRD, was elected to power.

to 1982:Although a highly regarded presidential incumbent, towards the end of Guzman's tenure he was beset by media scandal over alleged financial irregularities and the pressure led to his suicide. Consequently the Vice-President Jacobo Majluta Azar was installed as President of the Dominican Republic for the remaining 43 days of the term.

1982: Salvador Jorge Blanco was nominated to run as PRD candidate in the elections of this year (Majluta supposedly being judged too old, though he would have been only 48!), and was subsequently elected President.

1983: Longstanding unrest amongst the poorer sections of the electorate led to demands for reform and resulted in "The Peasants Revolt".

1985: The Dominican Republic was once again in a parlous financial state and the IMF (International Monetary Fund) had to provide necessary support.

1986: Three former Presidents all stood as candidates in the election held in this year, namely - Balaguer, Bosch and Majluta. In this instance, once again, Balaguer was the victor.

1990: In the elections of this year Balaguer gained yet another term.

1994: In a hotly contested election Balaguer ultimately defeated PRD candidate Pena Gomez. Several recounts of the votes gave Balaguer the Presidency with a majority of under 1%. The apparent electoral irregularities of this year led to reform of the system and enforced an early subsequent election.

1996: The aging Balaguer stepped aside for a new PRSC candidate, Peynardo. Contesting the election was Pena Gomez (PRD) once again, and a candidate for the Partido Liberacion Dominicano (PLD), Leonel Fernandez Reyna. The electoral reforms required a clear winner to achieve 51% of the vote, this did not happen in the first round. Although Pena Gomez attracted 48% of the initial vote, once the weakest candidate (Peynardo with only 15%) dropped out, Leonel Fernandez garnered virtually all of this support in the second round and was subsequently declared President.

2000: After a strong start to his term as President, attempting to deal with endemic corruption in the system, Leonel Fernandez's enthusiasm for change, and his support wavered. Consequently Hipolito Mejia, a candidate who had curried favour with the massive body of 'poorer' voters in the Dominican Republic, came to power.

to 2004: After the positive steps made during Leonel Fernadez's first tenure, the Mejia term saw a dramatic down-turn in the economic progress of the Dominican Republic. Revelations about massive bank fraud undermined public confidence, as well as reversing previously positive economic growth.

2004: Leonel Fernandez was re-elected President in August this year, carrying with him the hopes that the he can once more re-invigorate the Dominican economy and counter the ever present spectre of institutional mismanagement and fraud.

During the Mejía administration, the constitution was changed to again allow the immediate re-election of presidents.

Although President Fernandez party ostensibly did not support such a reversion in re-election policy it actually enabled the President to stand, and seek re-election in 2008.

Leonel Fernández won the PLD primary election with almost three quarters of the vote against his former Chief of Staff and confidant, Danilo Medina.

Having defeated six other candidates, Leonel Antonio Fernández Reyna was declared the victor of the 2008 election. He achieved 53% of the vote against 40% for the PRD candidate (former president Mejía's closest aide) Miguel Vargas, and 4% for the PRSC's candidate, Amable Aristy.

President Leonel Fernández Reyna was sworn in for his third term, with the traditional ceremony at the National Congress, on 16 August 2008. His current term is ended in 2012. 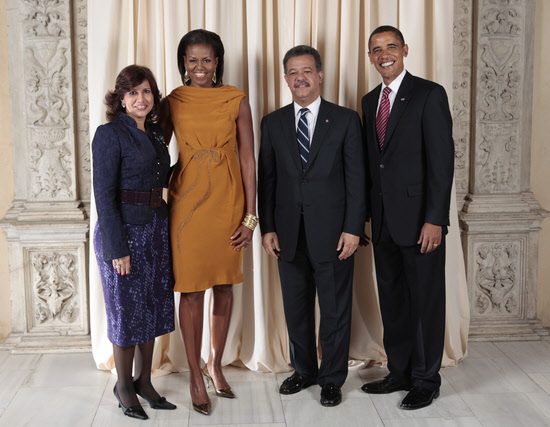 Danilo Medina Sánchez (born 10 November 1951) is Leonel fernandez' formeer chief of staff, a long-term a Dominican politician and since 2012 -- President of the Dominican Republic.

A member of the Dominican Liberation Party (PLD), Danilo Medina "won the May 2012 Dominican presidential election, defeating Hipolito Mejía with 51% of the votes. In May 15th 2016 Danilo Medina leading a coalition of parties won the 2016 Dominican presidential election, defeating the leader of the opposition and PRM candidate Luis Abinader with 61.8% of the votes, the highest percentage received by a president elected in free elections since 1924 when Horacio Vásquez won the presidency with 69.8% of the ballots—surpassing Juan Bosch's record of 59.5% obtained in 1962, and Leonel Fernández's 57.1% of the votes obtained in 2004." (Source Wikipedia) 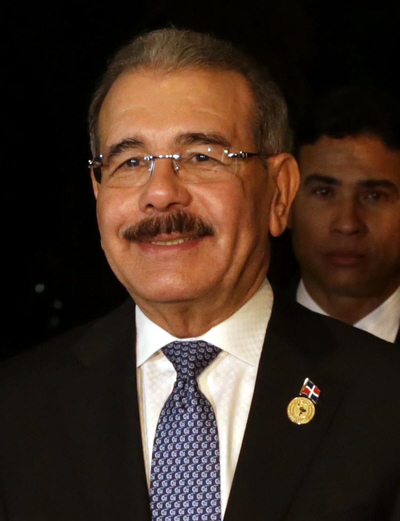